(C) 2019 by Rych McCain, All Rights Reserved. No part of this column may be reprinted, re-posted or duplicated without written permission from Rych McCain Media/Syndication. Violation is subject to applicable laws

This blog is ranked #15 in the Top 20 Hollywood Blogs from the
massive worldwide data base of FeedSpot.com 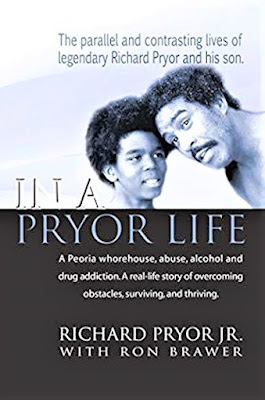 The Hollywood Museum recently celebrated the career of Comic/Acting great, the late Richard Pryor Sr. The occasion doubled as the Los Angeles launch and signing of Richard Pryor Jr.’s memoirs book titled “In A Pryor Life.” The book immediately took off and was in it’s second printing just days after release.

The first order of the evening was the unveiling of a costume worn by Richard Pryor Jr. in the film "College Debt" co-starring Lucille Ball's granddaughter, Katherine Luckinbill, Janet Carroll and Academy Award winner, Celeste Holmes, in what would be her last film. The costume will be included in the museum's upcoming Real to Reel: Perceptions and Portrayals of LGBTQ History in Film and Television.


Having such a super famous and controversial  father in the person of the late, great comedian/actor Richard Pryor, Sr.; what could it possibly be like being his son? Pryor lights up saying, “Crazy! It’s crazy! Right now in my life, as far as my age, I’ve learned to enjoy and embrace it, so I’m happy to be the son of Richard Pryor. It’s something to be proud of. It’s something to be happy about. And to be able to carry on his legacy in my own way is an important thing and it makes me feel good.”

Because of who he is, people in general use poor judgement and expect Pryor to be or act a certain way. How has he handled that over the years? He gestures, “Years ago I used to let it affect me and bother me. It effected my mind, my body and all of those things. Now you have to learn to take those things and shake them off. It’s like being a plant and you have a bind wrapped around strangling it. You have to learn to cut those things off, step back from those things and those people who are detrimental to who you are as a person. On the pleasant side, what is Pryor up to these days? He flashes a big, satisfying smile, “I live in New York City. I’m a nominated cabaret performer. I sing, act and have done quite a few indy films. Now I’m working on creating my one man show off of my book. I’m excited about it. It took me a while to do it. I’m ready now and ready to go. I’m moving ahead.”


Getting back to his book, appropriately titled “In A Pryor Life.” Pryor explains, “It’s about telling the struggles and things that I went through as the son of. But showing the darkness I was in but also showing the light and how you come out of those obstacles, trials and tribulations and the pain. How you can be a better person to yourself so you can be a better person to others.” He mentioned being sexually abused by a friend of the family, Performing in drag (his father simply said "Just be the best at it."), a parallel life to his fathers and the addictive personality they shared and how his father talked him down from the drugs, doing drugs while working on "The Color Purple “the differences between life in his moms home and the other side of the family coin in a world of fame, celebrities, etc. at father's home and how his father once said "Had I know I would become famous, I would never have cursed you with my name."


Doses Pryor like the way his dad has been portrayed in some of the documentaries made about him? He frowns a bit, “Some of them; especially the last one I know I didn’t care for as much. I thought it was quit sad that you can do a documentary without interviewing any of his children, his legacy. That’s the part that hurts me a lot. When you want to get the truth, get the whole truth not the half-truth.

What words of wisdom does Pryor offer to young people aspiring to enter show-business? He advises, “ you have to be a strong person, know how you are and be able to handle rejection because that comes along with the territory. But you have to surround yourself with people who are looking out for you best interest. It’s not always a thing like because someone says no to push them away because you want to hear yes. Sometimes you need those people around you to tell you no and not to do this and let’s go here. You want to make sure that you stay on your right journey and not a journey that someone else put you on.” Why New York instead of LA? Pryor explains, “Well I lived in LA years ago. I just love the energy of New York City.

(C) 2019 by Rych McCain, All Rights Reserved. No part of this column may be reprinted, re-posted or duplicated without written permission from Rych McCain Media/Syndication. Violation is subject to applicable laws

This blog is ranked #15 in the Top 20 Hollywood Blogs from the
massive worldwide data base of FeedSpot.com 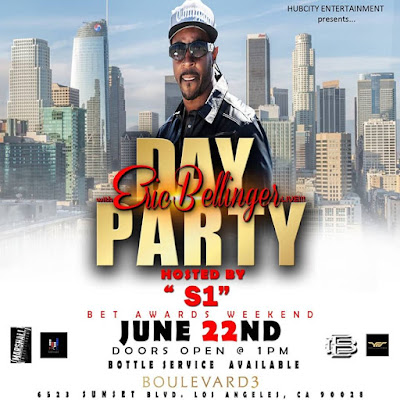 Emmanuel "Spud" Wright's company Hub City Entertainment had a cabana Daytime Party at the popular Boulevard 3 Club on the famed Sunset Strip in Hollywood on a balmy Saturday. Afternoon as part of the BET Week series of social events. The format was hip hop/rap with performances by Headliner Eric Dillinger and other rappers.  DJ Ever Ready kept the music kicking and even had a mascot circulating throughout the crowd to keep the boogie spirit going! Hub City Entertainment has artists and projects lined up that we will be hearing a lot about in the near future.


Boulevard 3 is one of the mainstay entertainment venues in Hollywood and has served as the host afterparty spot for such entertainment luminaries as “ Diddy, Tyler Perry, Jamie Foxx and the list goes on. Hub City Entertainment packed the house, put on an entertaining live show and rocked the house with many guest stars.


© 2019 Rych McCain Media/Syndication TM
(You DID Hear It From Me!)
Twitter@rychmccain and Facebook (Like Me)
Posted by Rych McCain at 10:12 PM